Fr. Hyacinth was born in the small mountain town of Conifer, Colorado and studied Electrical Engineering at Columbia University before entering the Order of Preachers. He joined the Health Care Ministry in the Summer of 2019 and was ordained to the priesthood in May 2020. Fr. Hyacinth serves as the Executive Director of the Dominican Friars Health Care Ministry. 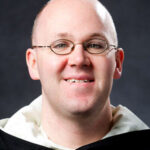 Fr. Jonah grew up near Syracuse, New York, received a BA in 2001 from Franciscan University in Steubenville, Ohio, and entered the Dominican Province of Saint Joseph in 2003. He was ordained to the priesthood in 2009 and, after completing a Licentiate degree in Sacred Theology in 2010 and serving as parochial vicar at the Parish of St. Mary in New Haven, CT from 2010-2012, was assigned to the Priory of Saint Catherine of Siena to serve with Dominican Friars Health Care Ministry of New York in 2012. 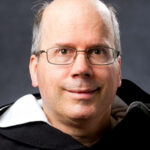 Fr. David is originally from Connecticut. He studied Molecular Biology before entering the Dominican Province of Saint Joseph in 1991. After studying Theology and Medical Ethics at the Dominican House of Sudies in Washington, DC, he was ordained to the priesthood in 1998. For many years, Fr. David served as a missionary in the Province of Saint Joseph’s Vicariate of Eastern Africa. After returning to the United States, he was assigned to the Priory of Saint Catherine of Siena to serve as a chaplain with Dominican Friars Health Care Ministry of New York. He is currently the Health Care Ministry’s head chaplain at Hospital for Special Surgery.

Fr. James Ritch was raised in Mahopac, NY. He received a bachelor of science in biology at Providence College and subsequently researched Huntington disease for two years at the Massachusetts General Hospital in Boston. He matriculated to the University of Massachusetts in Worcester, earning a Masters in neuroscience. Prior to entering the Order of Preachers, he performed cancer research as a staff member of the Biology Department at Providence College. Fr. James was ordained a priest in 2022, and joined the Health Care Ministry immediately after ordination.

Our Mission
Our History
What We Do
Our Parish and Priories